On January 1, 2023, the new Self-Employed Workers contribution system (RETA), introduced by Royal Decree Law 13/2022, of July 26, will enter into force. This system supposes the introduction of substantial changes with respect to the previous contribution system, in which the self-employed worker paid his contributions according to the choice of a minimum or maximum contribution base.

How does the new System work?

As of January 2023, professionals (freelance) will pay social security contributions base on the net income from their activity. To this end, the General State Budget Law will publish a general contribution Scale and a reduce Scale on an annual basis. Each Scale will be divided into consecutive income thresholds. given minimum and a maximum contribution base for each one. For 2023, the approved Scale is as follows: 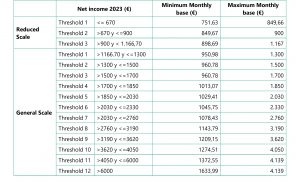 How do I know what is my contribution threshold?

The individual must calculate a monthly average of his/her net income (according to the Personal Income Tax rules) and identify the corresponding threshold of the Contribution Scale. Once done it, it is possible to choose the maximum or the minimum base for contribution.

It is possible to change my contribution base within the year?

Yes, the individual will be able to modify the contribution base. The following deadlines should be considered:

Will there be any verification of the reported estimated income?

Monthly base for contribution reported for a year, will be considered as provisional, until the Social Security will verify the real income with the Spanish Tax Authorities, once the Annual Tax Return has been filed.

Will the Benefit of the “flat contribution” continue to exist?

Yes, during the first twelve months of activity the individual will benefit from the “flat quote” of Social Security. The flat contribution General State Budget Law .

When will the 2023 revenue estimate need to be reported?

During the month of January and until February 28th the individuals must report their estimated 2023 revenue to the Social Security, though “Importass”. The contribution base reported, will apply from March 1st 2023.

During December 2022 and until January 2023, it is possible to make estimations of Social Security.

At albea, we are at your disposal for any further assistance you may need. You can contact to us at www.albeatax.es/en

247 Form – International move outside of Spain

Please feel free to share on your social networks!

Can we help you?